On July 3rd 2016, the Alexanderson Alternator at Grimeton in Sweden was heard on 17.2KHz using my RA137A, RA17L and Top-Band Inverted-V Dipole. Reception was in AM with IF B/W set to 1.2KHz. The signal was very weak but then the wavelength at 17.2KHz is effectively 100 times longer than that for which my aerial was designed! 30 second audio clip below ...


The other day. I was doing some final testing of an RA17L for a client, and noticed that the Calibrator wasn’t working. Generally I never have any problems with these, so this was probably going to be nothing more than a faulty valve or an issue with a valve socket … this particular RA17L having been ‘on the shelf’ for several months. As expected, a wiggle of V15, CV4009 did indeed bring the calibrator to life. However the fix was not permanent since the next time the RA17L was powered up, the calibrator was once again not working. Again, moving V15 brought it to life, but it was clear that further investigation was required. 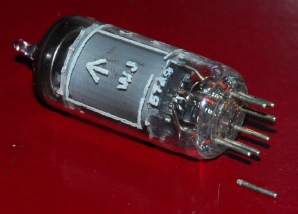 Spraying the valve socket with Isopropyl Alcohol was tried to little or no effect, so I removed the unit from the chassis and removed the bottom cover and the valves. At first glance there appeared to be nothing amiss with the connections to the valve base. Damaged receptacles are rare, but I have come across one instance. But again all the receptacles felt firm. Another possibility was that the contacts in one of the receptacles might have become splayed and were thus not making good contact with the valve pin.
That’s when I discovered the fault … Pin 1 (grid 1) was still in the valve socket. It had snapped off completely inside the glass envelope without compromising the vacuum. Moving the valve had obviously temporarily made the required contact, but when the valve cooled it would disconnect again.
I’ve seen plenty of top-caps come off older IO-Style valves but until this week I have never seen a valve fail in this manner before. Needless to say, replacing the valve resolved the intermittent calibrator issue.
Alexanderson Alternator, Grimeton
« previous
next »