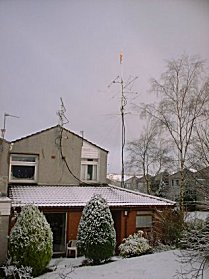 Christmas Day, 2000 - a white Christmas! Not a breath of wind, to the extent that the snow steadily built up on the traps and coils on the Fly-Trap inverted-V. Since the temperature didn’t rise above zero Celsius for about a week, the horizontal sections of the fly-trap were sagging under the weight of the ice rather noticeably after a few days. “Wait a minute! An Inverted-V with horizontal sections?“ Here’s how - the feed-point is at 11m above the ground with the two sides dropping to form an inverted-v. However because of space restrictions, I had to trade-off between height and effectiveness and anchored the ends to the side of the house so that the side profile is a bit like a triangle with about 7m between the ends at the bottom. 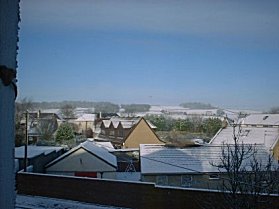 ‘Take-off’ from this QTH is a bit restricted to the North by a hill and also to the South since the house is some 2m below the adjacent main road . . . . A feature which effectively reduces the height of the antennas. Also, to the South, we have an area of dense woodland. However we have a good ‘take-off’ from about 30 degrees through to about 110 degrees and this is exploited on 23cm. 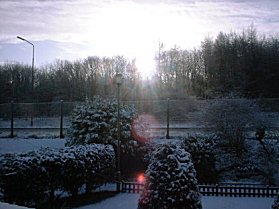 
I frequently have QSOs on 23cm with GM4OGI who is at a distance of 11 Km on a bearing of 295 degrees. My signals at his QTH are a clear S9 despite the fact that there is a large hill in the way. However if I beam 045 degrees and if he beams a little further North, my signals go up to S9+60! The reason for this is that our signals are ‘bouncing’ off the Forth Rail-Bridge! Using the bridge as a reflector not only reduces the path-loss between our two QTHs but since we are both beaming across the North Sea, we stand a chance of attracting some Scandinavian attention.