You Just Have To Laugh 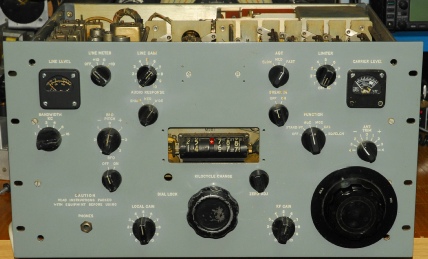 Where has 2018 gone!? Basically I have spent most of the year refurbishing another couple of R1155s an RA17L and chasing a fault in an RA1772… latterly I have been restoring to life a Collins R-390A/URR, … but that’s another story.

As part of the deal for ‘fixing’ the 390A, I have gained a Collins R-390/URR … not entirely complete, but I have been able to ‘locate’ most of the missing parts to date and replacements for those that are ‘wrong’, like the MHz dial, which might have come from another Collins radio. I hope I can find a genuine Carrier Meter. 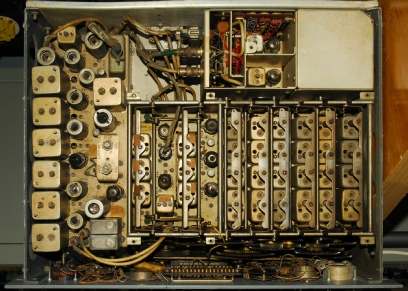 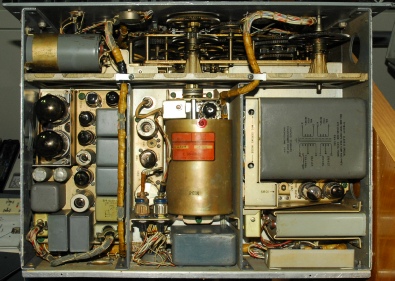 Mention the designation R-390 or R-390A and many have been known to become teary-eyed. Both the 390 and the later, less-expensive 390A are mechanical marvels and their performance is said to be legendary. Unlike the Racal RA17 etc., the R-390 is no ‘Band-Cruiser’. I won’t go into the pro’s and cons right now, but in terms of frequency coverage and long-term stability the Collins R-390 and the Racal RA17L are a close match. What the Collins achieves by way of mechanical genius and thorough electronic design, the Racal achieves by way of simple elegant arithmetic. One might even describe the Collins R-390 as being gloriously over-engineered. But it is a thing of beauty.

Having got the R-390A up and running … replacing a total of 19 valves in the process, I began to wonder if the R-390 would ‘go’. I had previously removed two 6AK6s to replace two in the 390A, but since the replacement 6AK6s had arrived I decided to give the old 390 a try. Curiously I had tested all the valves in the 390 and only found one 12AU7 with borderline heater-cathode leakage, whereas the 390A had 19!! So it got me thinking … give the old girl a try! I wound the mains voltage up to 230V slowly using a variac. This caused the antenna relay to buz a bit until the volts were high enough. So far so good… and then suddenly it burst into life. I would go as far as to say that it worked very well, with only the calibrator proving to be faulty. So I left it running and went off to grind some coffee beans to make coffee, as you do. It was whilst I was in the kitchen that I heard the R-390 go ominously quiet. Back in the workshop, I noted that all the valve heaters were ‘out’. But not only that, there was also an all too familiar acrid smell… very faint, but none the less present in the room. The fuse had blown in the mains plug too. Heaving the radio onto its side and sniffing around, it wasn’t difficult to confirm what I suspected had happened. At least one of the capacitors in the original mains filter had blown.

Yes, that is indeed wood! 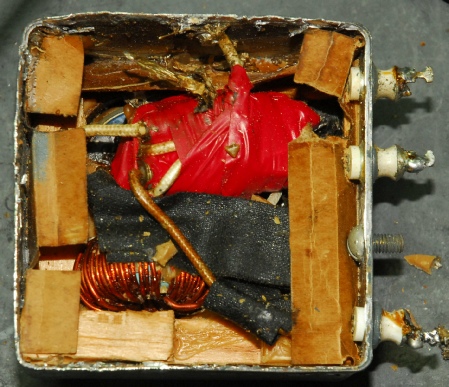 Having been so impressed with the receiver’s performance, I had just ordered a genuine mains lead for the 390.  Now it was clear that the filter that was integral to the matching chassis plug was damaged. Fortunately prizing the back off the filter was the easy part. Getting it out of the receiver was not so easy. Imagine my surprise when I saw what was inside the box. I actually laughed out loud. The four capacitors were bound up with red electrical tape. There was cloth electricians tape over and around several of the joints… and yes, there really are some wooden blocks in there too! As well as all this, there is also some good old wax poured in for good measure. Given Collins’ attention to detail I was very surprised that the filter fitted in the R-390 was less than professional in its assembly. In the photograph on the left, you can clearly see where one of the capacitors has exploded out from the PVC wrapping. On dismantling the assembly, it was found that two of the four 100nF capacitors had exploded. See below. 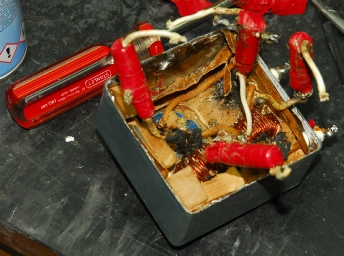 The original capacitors were actually chassis-mounting types individually wrapped in PVC tape. Two of the four had literally blown the threaded stud out of the aluminium can. I replaced them all with modern polyester equivalents of the same 400V rating and used a mix of heat-shrink sleeving and epoxy to ensure that there was no risk of short-circuit. The lid was then cleaned and re-soldered back in place and the filter module mounted back in the chassis. The old 390 is working again but now to find out what is wrong with the calibrator. Fortunately it is a module which can be worked on out of the main chassis. 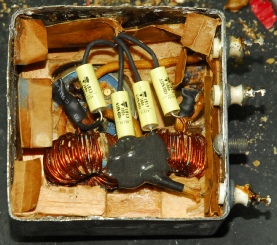 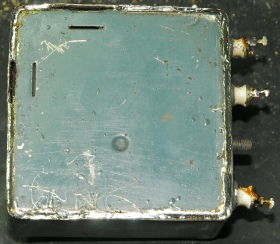 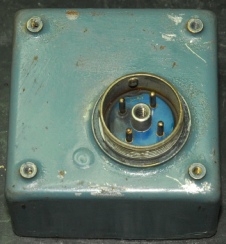