Back in December last year (2019) a good friend of mine introduced me to the famous Pye Black Box, which up until then, I had never heard of. But it seems that a search on the Internet does indeed yield a lot of chatter in the vintage forums. My experience with Pye had previously been limited to their contribution to the field of VHF mobile telecommunications; something that they did very well too. Take the lids of a Pye Cambridge or Vanguard and you will not be unimpressed with the build standard.

It would appear that in 1954 Pye had started to make a name for themselves in the newly emerging field of high fidelity sound reproduction. The Pye Black Box was one such offering; a table-top 'High-Quality Record Reproducer', as they called it back in the day. As well as various versions of the actual record player, there were I believe at least four different versions of the amplifier.

The MKI and MKII are very similar in that the valve line-up is identical with an ECC83 as the pre-amp and phase-inverter driving a pair of EL42s in push-pull. The rectifier is an EZ41. The MKII differs in that the primary of the output transformer has additional taps making for an ultra-linear output stage. A later model of the amplifier sported a similar input arrangement driving a much refined ultra-linear push-pull output stage comprising a pair of ECL83s and solid-state rectifier. I believe there was eventually a solid-state version, but don't quote me on that. 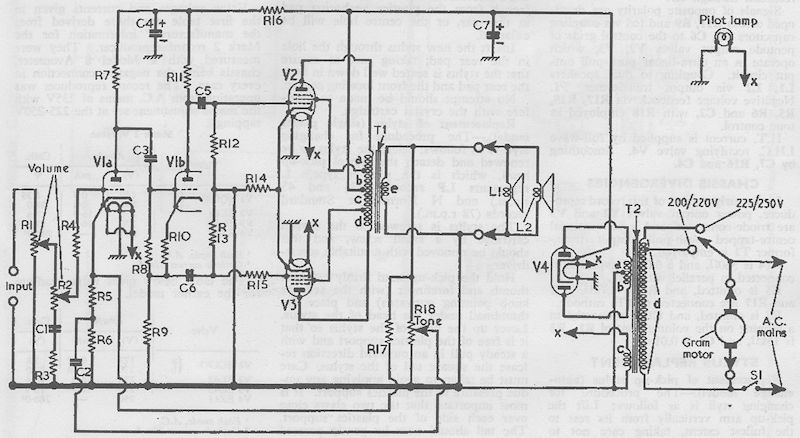 My friend and I had been mulling over the idea of making a high-quality audio amplifier for our Collins receivers. He has a couple of R-390As and I have an R-390. These have no direct means of driving a loudspeaker but with a suitable transformer connected across one of the 600-ohm outputs, a loudspeaker can be driven. However, Collins thoughtfully provided a means to access the detector output and this is what most 390 afficianados use to drive an external audio amplifier ... hence our idea of making a high quality valve amplifier

So when he announced that he had bought a MKII 'Black Box' I started looking for one myself ... and found one going for a reasonable price too. It was advertised as a working MKII. The photographs made it look a little grubby but I wasn't too bothered as I was planning on giving it the same treatment that I give RA17s. When it arrived it actually looked a lot better than in the photographs. All the valves tested good on my VCM-163. But when I measured the resistance of the output transformer primary it was clear that it was open-circuit. This was dissapointing yet not too unexpected. According to the chatter on the vintage forums, open-circuit primaries are not uncommon.

With reference to the schematic above: Winding 'a' was open-circuit and winding 'b' measured less than winding 'c' so I concluded that although 'b' was intact it probably had more than a few shorted turns. This is the same failure that blights the AR88 and I would suggest that the cause is the same. Although the resistors in the 'Black Box' have faired well over time, the same cannot be said for the little black or chocolate coloured Hunts capacitors whose outer covering just disintegrates on touch. Again referring to the above schematic and in particular to C5 (5nF). If this little capacitor becomes a resistor, i.e. it becomes leaky, then HT will be applied to the control grid of V2 via R11. V2 will be turned on hard and draw excessive current through windings 'a' and 'b'. 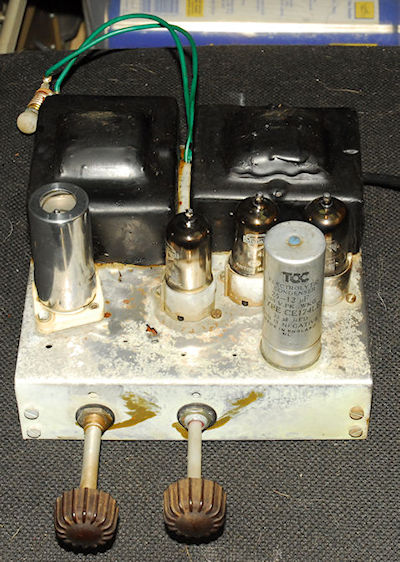 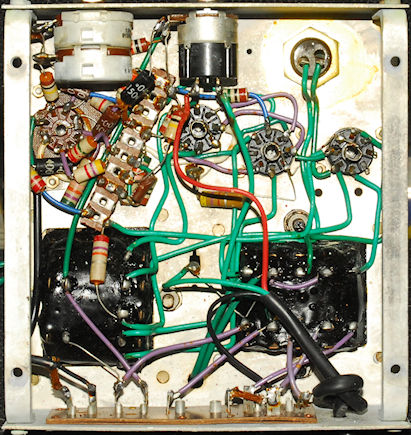 Two views of the MKII Black-Box as it arrived. Curiously, the Mains Switch is ganged with the Tone Control, which incidentally is not the original as the shaft is nylon and the value is 5K as opposed to 1K.


The component layout appears a tad odd. I found myself asking "Why are the valves not in a neat row?" The tag strip mounted at a slant is probably because of space restraints, but it isn't screwed in place. Instead it is soldered onto two punched out solder-tags which are actually part of the chassis. And the transormers are bitumen-dipped, unlike in the MKI where the top cover was of pressed-steel. I imagine that Pye were maximising profit and at the same time looking for ways to minimise manufacturing time.

The valves are interesting. The ECC83 sits in an anti-microphonic base similar to those used for the balanced mixer in the Racal RA37 and RA137. The EL42s and EZ41 are of B8A base type which have a locating pip which is necessary since the 8 pins are equi-spaced.

Historical note: The original B8A valves which first appeared in 1947 had a central metal locating spigot similar to the Octal base. These original B8As also had a metal skirt with a locating pip. In time the central spigot was left off and eventually the metal skirt was also discarded with the locating pip moulded into the glass.

Getting back to my amplifier with its open-circuit winding, I contacted the seller who most graciously apologised and offered to supply a replacement transformer. However he didn't have the correct type and asked if I was happy to accept one without the additional taps. Since I was not looking for 1950s hi-fi quality, a super-linear audio stage was not the prime reason for the project. I accepted his offer and the replacement transformer duly arrived in the post. This appears to be the output transformer from a MKI Black Box, although the D.C. resistances don't match those in the service sheet for the MKI. That said, it still works beautifully!

The fact that the D.C. resistances are different from the service sheet might actually be an error since I found a discrepency between the service sheets for the MKI and MKII where the physical location of V2 and V3 are transposed. This had me scratching my head when attempting to ratify that a faulty C5 would cause damage to windings 'a' and 'b' in the output transformer. As it stands, the layout diagram for the MKI shows V2 and V3 in the correct positions. 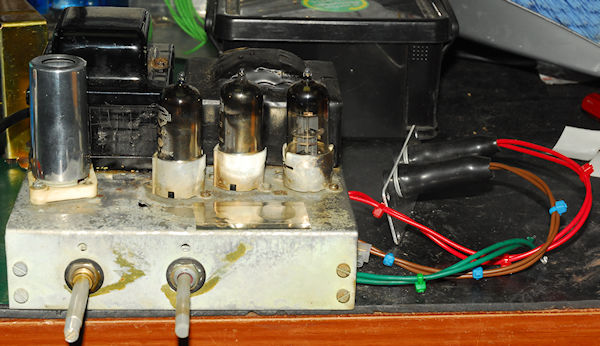 
In the photograph above, note that the chassis-mounted smoothing pack has been removed and that I have fitted a couple of external fuses ... one for the mains and one for the HT. If only Pye had taken this precaution, maybe the output transformer would have been saved? 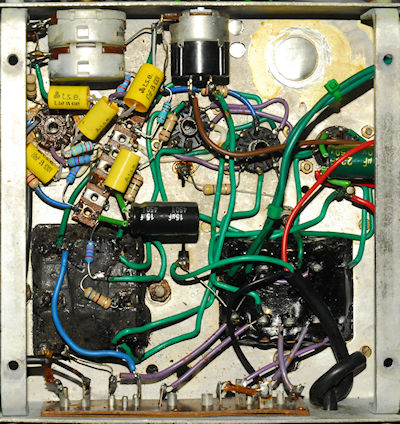 There were actually two reasons for removing the smoothing pack. Firstly, although it looked physically in good condition and of relatively high quality, it was probably slightly older than me and I could not rule out internal deterioration. Secondly, I had plans to fit the amplifier in a home-made loudspeaker enclosure that I had built to house a very nice 70W drive unit that a friend had kindly given me. The problem here was that the large magnet made it impossible to fit the amplifier without having it 'hanging' out the rear of the enclosure. So it made sense to remove it from the chassis and fit two individual capacitors on the underside.

As with my RA17 refurbishments, all the resistors and capacitors in the 'Black Box' amplifier have been replaced. Note also that I have fitted a 680-ohm resistor in series with the centre-tap of the primary winding on the output transformer as a further precaution against future damage. 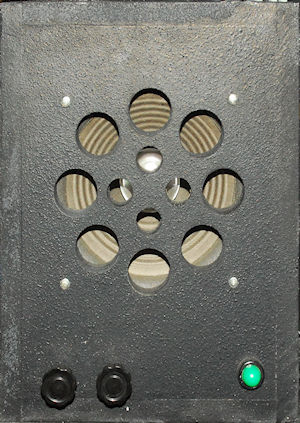 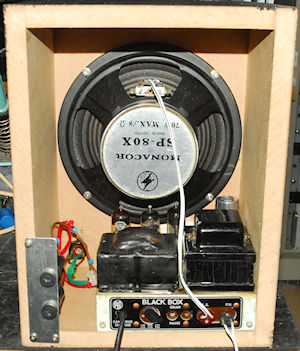 Two views of the finished Black-Box amplifier, fittingly mounted in a black box.


Concluding the project ... You certainly couldn't accuse it of looking pretty, but it does sound really good. In the absence of a signal, it is exceptionally quiet and really shows off the sound quality from the R-390 detector stage output. I managed to find some genuine vintage connectors to match the Pickup and L.S. sockets on the rear panel. I have not found it necessary to cover or partially cover the rear of the enclosure.
Pye, Black Box
« previous
next »