I got a new calculator last week. Well, not exactly ... A Sinclair Scientific. I used to have one, but gave it away over 40 years ago.

I started high-school in 1970. Around this time I was playing with simple electronics projects thanks to an electronics kit that I had got for Christmas. I don't think I learned much, but it definitely sparked my interest. A few of us at school had dreams of building all sorts electronic things but sourcing the parts, particularly transistors was an issue ... besides, in those days, such things were pricey. At the time, the BBC's Tomorrow's World was almost compulsory viewing and I remember vividly one episode when I believe the Sinclair Executive pocket calculator was show-cased. The presenter tipped a huge box of transistors onto the floor as an example of the complexity of the integrated circuitry in such a small device. My eyes almost popped out of my head at the sight of so many transistors in a single pile. Honestly, I was more attracted to the pile of transistors than the calculator. 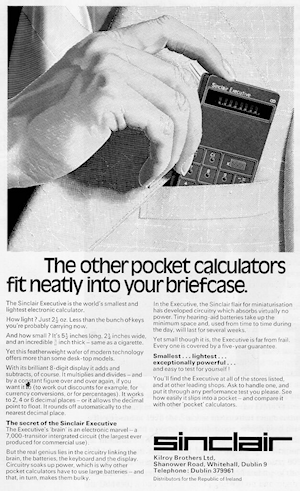 In 1972, the Sinclair Executive was the world's first pocket calculator and retailed in the UK for a whopping £86.35. At it's heart was the Texas Instruments TMS1802, boasting 7000 transistors. It had an 8-digit LED display, measured only 56mm x 138mm x 9mm and was powered by three 1.3V hearing-aid batteries. Despite it's 4-function limitations it also offered automatic squaring, reciprocals and a choice of fixed or floating-point arithmetic. The Executive was continually developed and went through several evolutions. The over-all size remained the same but the case-design and key-pad layout differed from the original.

The following year (1973) the Sinclair Cambridge was announced ... essentially still a 4-function arithmetic calculator but for almost one third the initial price of the Executive. Then in March of 1974 the Sinclair Scientific was launched, using the same case as the Cambridge, it was initially sold for a mere £50 + VAT, so at the time, only £52.50 (I think). Or you could build it yourself from a kit ... and that's what I did.

As with the Sinclair Executive, the Sinclair Scientific was also a 'World First'. It wasn't the world's first pocket scientific calculator. That accolade went to Hewlett-Packard's HP-35 which sold for $395. The Sinclair Scientific was however the worlds first single-chip scientific calculator (if you ignore the display driver chips). Sinclair's goal was to build a $100 scientific calculator. Their plan was to use the inexpensive Texas Instruments TMS0805 4-function calculator chip. TI engineers said this was impossible - their chip only had 3 storage registers, no subroutine calls, and no storage for constants such as π. The ROM storage in the calculator held only 320 instructions, just enough for basic arithmetic. Nigel Searle at Sinclair Radionics came up with new algorithms and wrote the code for the world's first single-chip scientific calculator, somehow programming sine, cosine, tangent, arcsine, arccos, arctan, log, and exponentiation into the chip. The engineers at Texas Instruments were amazed. To find out more about how this was achieved, see Ken Shirriffs blog.

Reading Ken's article, something jumped out at me which took me right back to 1975. I had found that there was at least one (long forgotten) scenario where although the values entered were within the allowed limits, the displayed answer was wrong. I also found that it was repeatable and identified the range over which this error ocurred. I then wrote a letter to an electronics magazine of the day, detailing my findings. I got no reply. The paragraph entitled 'Bugs and limitations' would appear to vindicate me ... albeit 45 years late. 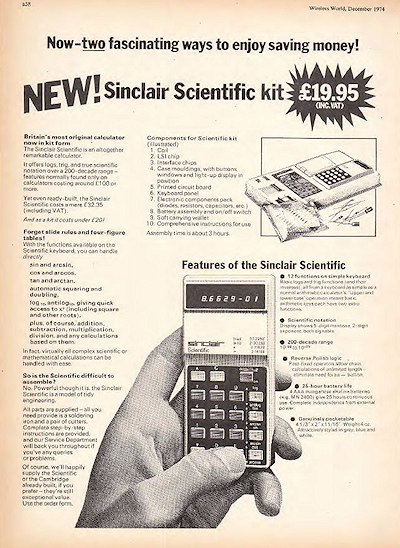 At a time when the use of Log-tables was taught, to the extent that use of such tables even featured in exams, it took a while for schools to acknowledge that the calculator was here to stay. The Sinclair Scientific employed Reverse Polish Notation and I used to find it amusing when class-mates would ask to borrow mine and watch them trying to figure out how to use it; There being no decimal point button and E is not equals!

As technology advances and integrated circuits get smaller and more complex (see Moore's law ), it was inevitable that better and faster scientific calculators came along. I eventually gave my Sinclair Scientific calculator to my Dad. I have had several calculators since; a couple of Casios and a couple of Sharps spring to mind. But I have always wanted to get another Sinclair Scientific, and last week I finally managed to 'snag' one on Ebay.

Left: My 'new' calculator, in much better condition than the one I gave away. Only one of the battery contacts had broken, unlike mine where at least three had snapped to the extent that the batteries were held in position with carefully placed strips of card! I took great delight in showing it to my son who, as a games-programmer, is highly proficient in Maths. I used the cube-root of 27 as an example. "I've never heard of Antilog", he said. Since I was taught 'Logs' at school, I was no stranger to such things and explained to him that Antilog of 'x' was achieved by raising 10 to the power 'x' and that on most scientific calculators, that function was usually carried out by pressing 'shift' then pressing the 'Log' key. I proved it by entering the Sinclair Scientific method of calculating the cube-root of 27 into my old Sharp EL-9450 ... See right:
... Its funny the things that amuse us! 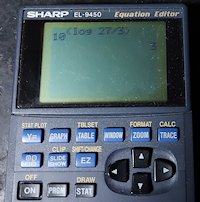 I love the tiny Sinclair Scientific with its minimalist key-pad and the fact that to perform simple functions such as roots you have to make use of logarithms ... brilliant! ... Sinclair succeeded in pulling off the near-impossible and gave us a scientific calculator for the price of a regular 4-function calculator. Sinclair went on to release the Cambridge Scientific based around the CF596 chip from General Instrument of Canada. The CF596 clearly had more registers and computing power than the TMS0805. As chip development accelerated, the market effectively flooded, driving prices down to the extent that making a profit and continuing to develop new calculators required significant investment. Sinclair Radionics was simply too small and the focus was arguably more on innovation rather than satisfying what the market was asking for. By 1979 Sinclair was no longer making calculators and the infamous Black Watch had proved to be such a 'money sink' that Radionics was sadly wound up.

Finally, for a comprehensive insight into 'all things Sinclair' go to Planet Sinclair ... although, this is one of the several websites which erroneously give March 1974 as the launch date for the Sinclair Cambridge Scientific whilst also saying that the Sinclair Scientific was launched in August 1975, which we know is incorrect. Other than that it is a fascinating read.
Sinclair, Scientific, Cambridge, Executive
« previous
next »