4 minute read
This post is part of the series 'The Racal 3700 Series':

Outwardly, the RA3712 appears identical to the RA3701, from the front anyway. Technically, the RA3712 is a dual version of the RA3711. Whereas the RA3701 covers the same wide frequency range of 15KHz to 30MHz as the RA1792 and the RA177x series before it, the RA3711 and RA3712 cover the extended frequency range of 0.5MHz to 40MHz. This Seemingly odd range of coverage was in direct response to a customer's request for a receiver that covered the basic HF range (up to 30MHz) extended to 40MHz. This request was put out to tender, but Racal was the only manufacturer willing to undertake the task. Since all the RA3712s which I have recently worked on carry low serial numbers, I have to conclude that a relatively small number were actually manufactured. Although externally similar to the RA3701, increasing the upper frequency limit from 30MHz to 40MHz, the internal architecture as it were, is consequently different. 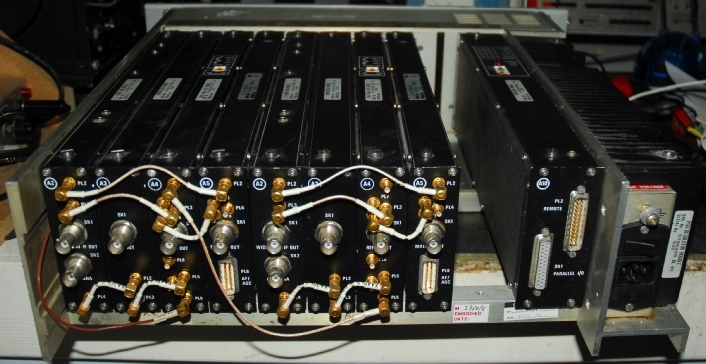 The PSU is identical to the RA3701, as is the CPU module, albeit running different firmware. The 5MHz reference oscillator is upgraded from the 9442 to the 9420, which provides the reference signal for both A4 modules. Below is a list of standard modules fitted in the RA3711 and RA3712.

The space to the left of the Processor module is for the optional IF Filter Module.

At first sight, the Synthesiser Module in the RA3712 looks identical to the 1st LO Synthesiser in the RA3701; especially the top side. However there are significant differences particularly on the underside. Why Racal chose to drop the ‘1st LO’ prefix from the name isn’t clear since that is precisely what it is.

Functionally identical to its counterpart in the RA3701, this unit generates the 1st local oscillator signal in the range 81.4MHz to 121.4MHz for injection into the 1st mixer in the Front End Module. The synthesiser is based on a PLL locked to a 20MHz reference produced by the Dual 80MHz Reference Module.

Looking very similar to the Reference/BFO in the RA3701, the Dual 80MHz Reference Module doesn’t actually generate two 80MHz signals! However, all 3 outputs (80MHz, 20MHz & 2.5MHz) are duplicated allowing one such module to provide the necessary signals for both receivers in the RA3712 or both drive units in the MA3752 Dual TX Drive Unit. What is interesting is that all RA3712s that I have come across use separate Dual 80MHz Reference Modules, where PL2 from one module is connected to PL6 on the other, thus both are locked to the same 5MHz reference source. On the other hand, both MA3752 Dual Drive Units that I currently have employ a single Dual 80MHz Reference Module serving both TX Drives. Although Racal dropped the suffix ‘BFO’ it does indeed generate the 1.4MHz BFO signal.

This module provides a Dual reference signal and the BFO signal, but its a bit more than that. The module can be split into two distinct sections:

A PLL producing a BFO signal that can be tuned over the range 1.4MHz +/- 9.99KHz in 10Hz steps. This signal is passed to the IF/AF module.

The IF/AF Module contains the 2nd IF (1.4MHz) amplifier, IF filters, AGC circuitry and demodulators. The subsequent baseband signal (audio) is then passed to the audio amplifier on the Front Panel PCB. An auxiliary ‘raw’ 1.4MHz output is provided at the rear BNC connector.
Whereas the most popular filter-set fitted in the RA3701 is option LA, the RA3712 appears to have been supplied with a restricted set designated option LG which consists of only three filters. However, thanks to clever firmware the LG filter-set makes provision for the following …

USB bandwidths of 1.8KHz and 2.7KHz, LSB bandwidth of 2.7KHz (uses USB filter with shifted LO), and Symmetrical bandwidths of 300Hz and 12KHz. The latter relies on the Roofing filter in the RF Module (as in the RA3701).