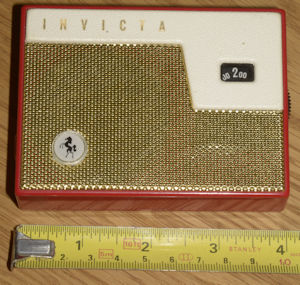 Invicta 'Vicki' 332
This tiny piece of history arrived in the post this morning. Its a pocket transistor radio, dating from 1961 ... and it still works! Or at least, it does now. It was very kindly gifted by someone who I had recently assisted in getting his Racal RA3701 up and running ... replacing a damaged 41612 edge connector and sorting out the user-configured IF bandwidths.

I remember my dad coming home one evening with a similar size, albeit Japanese radio in 1969, and I remember listening to reports of the moon-landing on it while we were on holiday ... in a caravan. I think that particular transistor radio died some time in the 1970s. What makes the one on the right particularly interesting is the fact that it is actually British!

Made by Invicta Radio, of London, it was marketed in its own little display box for an astonishing ten and a half guineas! Since 1 guinea was 1 pound and 1 shilling, 10 guineas equates to 10 pounds and 10 shillings. Half a guinea therefore translates to 10 shillings and sixpence. So, in 'old money', our little transistor radio here cost £10 11s 6d ... that's about £250 in 2022 ... expensive little radio! 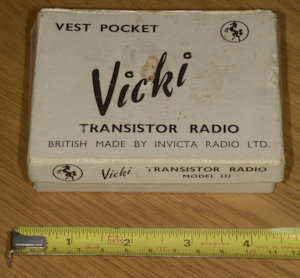 As you can see, Vicki was marketed as a Vest Pocket Transistor Radio. I'm thinking that for vest, they probably mean waist-coat? Actually, the name Vicki was not new for Invicta. It is afterall, derived from Invicta and at least one valve radio, the Vicki 26 from 1955, is a case in point. As far as the Internet is concerned, there is precious little out there relating to the type 332. At least I haven't come across any photographs, other than those on the front of service sheets. 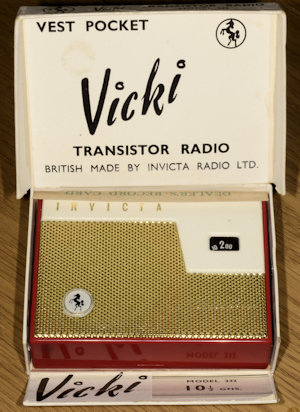 The lid of the box lifts up and the front of the bottom folds down. Invicta were clearly proud of their little radio. I suppose if you were expected to pay the equivalent of £250 in today's money, then the least they could do is add some theatre to opening the box.

Lifting it out of the box reveals the instructions. Essentially a Medium Wave receiver, covering nominally 185 metres to 555 metres, it also 'sort of' includes Long Wave. I say 'sort of', since, as the instructions say, when the waveband switch is set to 'L', the receiver is tuned to The Light Programme on 1500 metres ... aka Radio 4 today.

The Light Programme ... The Home Service ... memories of my childhood. 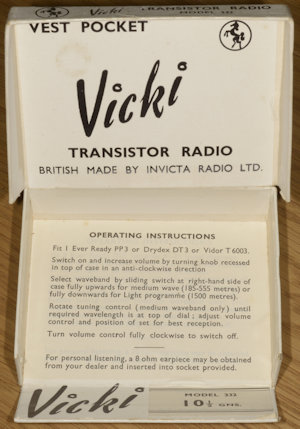 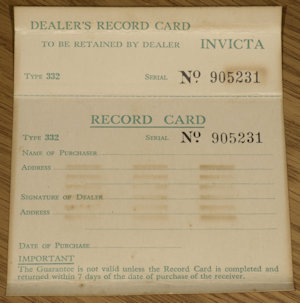 Also in the box; The dealer's card. I'm not sure how this was supposed to work, but I'm assuming that at some point, the card is cut along the dotted line. Maybe the dealer kept the top bit on record ... to be eventually reunited with the bottom once the buyer had filled in their name and address?

I suspect that this particular radio was never sold, and perhaps ended up in a stock auction. There is a large label with 3518 on it on the underside of the box, which may be a lot number. 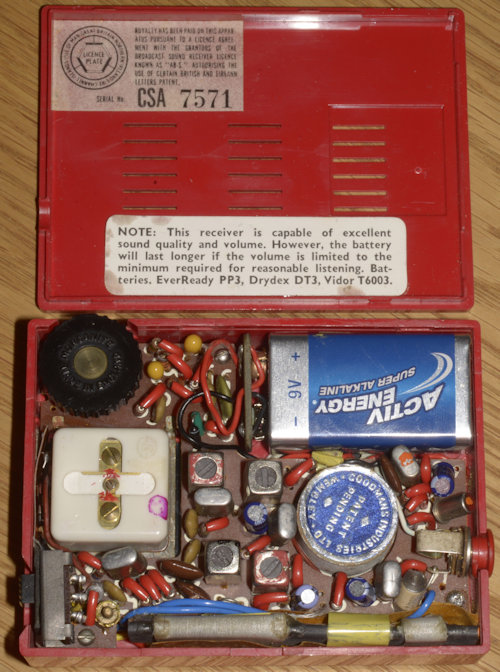 As implied at the start of this article, this little radio didn't work when it arrived. To be fair, I had been told in advance that it didn't work ... So I was already primed for a challenge. Initially it looks very similar inside to the little Japanese radio that my dad had bought back in 1969. However the 'Vicki' sports the CSA 'Licence Plate' common on domestic receivers from days of old.

When I switched it on, there was little more than a small hiss from the speaker, but moving it about I did hear a very faint 'Radio Four-ish' sounding voice ... faint but definitely there. I managed to download a free service sheet with a very high quality schematic and components list. This told me that the Vicki 332 is a 6-transistor receiver. The schematic also included the voltages around each of the transistors. These checked out almost exactly. Nice to see that the 60 year old germanium transistors were all intact! Even probing the board with a 'scope probe' told me that the local oscillator was running.

Actually, its the 6 germanium transistors that made this such an expensive early 1960s curiousity ... a 'must have' accessory, if you like. In the photograph on the left, the Newmarket transistors are easily identified as 5 oval metal cans and a round one just above the ear-piece jack-socket. With all the transistors apparently working, it was very likely that one or more of the ancient miniature electrolytic capacitors had failed. As it happened it was one of the two tiny 2uF ones that had failed. Once replaced, the receiver burst into life. I did however change all 6 electrolytics. I also went on to find that two of the very fine wires to the ferrite loops were on the point of failing.

The circuit design is simple yet quite clever. The audio stage is an NPN/PNP complimentary output stage and a one-transistor audio pre-amp. The detector is a crystal type using an OA90 diode which also operates as an AGC source, controlling the gain of the two IF amplifiers. There is no RF amplification stage as such; Instead the ferrite loop aerial is connected to the base of the Local Oscillator transistor, which also functions as the mixer.


On the right: The six decidedly dodgy electrolytic capacitors that I replaced. It was one of the two 2uF capacitors on the left which was actually faulty. These were replaced with 3.3uF Tantalum beads, seen just to the right of the volume control in the photograph above. The capacitor third from the left is actually 8uF and is in the AGC circuit. The schematic listed it as 5uF, so I replaced it with a 4.7uF Aluminium Electrolytic. The three remaining capacitors are 50uF and were replaced with 47uF Aluminium Electrolytics.

A Service Sheet for the Invicta 332 can be downloaded here