Back in October when writing my piece on Test Equipment I was immediately struck by just how far technology has advanced; particularly in the field of network analysis in RF applications.

In late 1978, I applied for a job in quality engineering with MESL. This was a company set up by two former Ferranti engineers to design and manufacture microwave components, such as circulators and isolators, to give two examples. When I was shown around the site, which was more of a design lab than a classic British factory, I spotted a Rhode & Schwarz Polyskop SWOB sitting in the corner of the Calibration Lab.


The SWOB is what is known as a Scalar Network Analyser; meaning that it simply measures the attenuation or gain of the device under test (DUT). I cannot remember if it was a type I (0.5MHz to 400MHz) or a Type II (0.5MHz to 1200MHz), and I can honestly say that I never saw it being used. 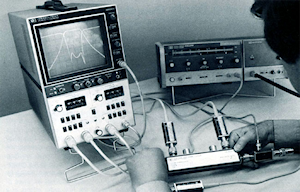 Example of HP8755A in use
The reason for this was because as I took up my position there in February 1979, we took delivery of a much less cumbersome network analyser … the Hewlett-Packard HP-8755A. This was another Scalar Analyser; actually just a plug-in module designed to slot into the classic 180T oscilloscope mainframe. Rather than use one of the dedicated HP-manufactured matching reflectometer bridges, we invested in a couple of Wiltron (now Anritsu) bridges and used (I think) HP-11664A detector heads.
First appearing in 1972, The 8755A required the use of an external Sweep Oscillator and for that we used the locally manufactured HP-8620C Sweeper Mainframe with a selection of Yig-based plug-in oscillators … an HP-86245, covering 5.9GHz to 12.4GHz and an HP-86222B, covering 10MHz to 2.4GHz spring to mind. There may have been others, but these are the only two that I remember. 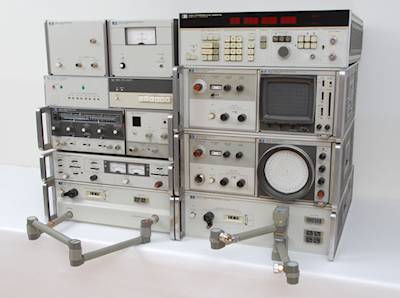 
Scalar analysers are fine for measuring attenuation, gain and return loss but in order to measure variations in phase you need a Vector Network Analyser, and Hewlett-Packard had produced the hardware for the job as early as 1970. By 1983 the HP solution had evolved into the massive 8409B which was a fully automatic Vector Network Analyser that filled two full-height 19” racks and was controlled by an HP-9826 computer. As you can see, it too required external sweep oscillators such as the 8620 and associated plug-ins.

It wasn’t just the physical size that was a challenge. Vector Network Analysis was also proving to be expensive.

Then along came the HP-8510 and this is where I get a little confused. Why? Well according to the HP Memory Project, the fore-runner to the 8510 was the 8409B in 1983, with the 8510’s first appearance in the HP catalogue in 1985. I won’t dispute that the 8510 first appeared in 1985, but I distinctly remember making the occasional trip to our sister-site just outside Edinburgh (the original MESL) to use their 8510, long before 1985 … probably as early as 1980 even? Was this a development model on loan perhaps? We will probably never know since both sites are long gone now. 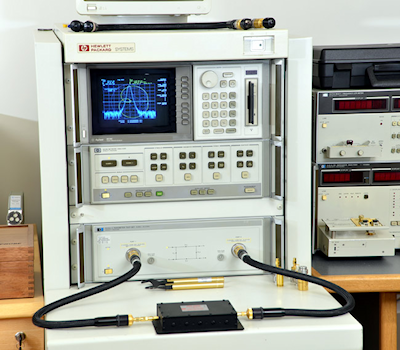 Example of HP8510C in use
The HP-8510 successfully combined several of the individual units that made up the 8409 allowing it to fit into a half-height 19” rack. However it still required an external sweep oscillator system and a range of frequency-specific S-Parameter Test-Sets in order to cover a range of 45MHz to 26.5GHz. I once heard that the price of a fully-loaded 8510 VNWA setup was an eye-watering quarter of a million dollars. So HP had maybe cut the size down, but not the price. Mind you, the specs. are eye-watering too, with a dynamic range of up to 100dB!

In 1988, at Linlithgow, we inherited an 8409 from another Racal site. This was a single full-height rack and was off course, controlled from an HP-9826. Occasionally I stayed back after work and used this behemoth to tune some 2.3GHz personal projects … amplifiers and mixers mostly. On one occasion I used it to make final mechanical tweaks to a home-made 20-over-20 slot-fed yagi made out of 15mm copper pipe and brassing rods.


The security guard that evening was obviously not having a good day and was in a bit of a ‘job’s-worth’ mood. As I walked out with my brief-case in one hand and 2.3GHz antenna in the other he stopped me, demanding to see proof that I wasn’t nicking some top-secret hardware. I couldn’t help but laugh … which made him even more ‘bolshie’. As if something made out of plumbing and brassing rods was part of some hush-hush project! Besides, none of the site projects at the time were anywhere near 2.3GHz. But he still wanted proof that it was mine. I told him I couldn’t even prove that my trousers were mine. That didn’t go down well. I think one of the senior engineers came to my aid and I was allowed to pass. You give some people a little power … hmmm.

Then in 2010 whilst looking for a way to accurately align the 40MHz bandpass filter in the RA17 series of receivers, I came across the DG8SAQ Vector Network Analyser. Although a simple scalar analyser would have sufficed, the DG8SAQ VNWA appeared to be what I was looking for and a whole lot more! The frequency range was 1KHz to 1.3GHz yet did NOT require any external frequency source. The beauty of this VNWA is that as well as being small and compact, it is entirely software controlled and currently runs on any Windows 64-bit or 32-bit operating system from Vista onwards. 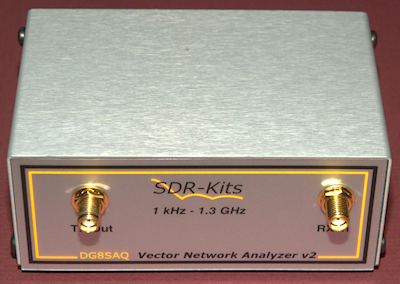 The current DG8SAQ VNWA is version 3 which is offered in 4 ‘flavours’. Back in 2010 version 2.6 was the current model and it was also available as a kit for anyone who was brave enough to tackle it.. This was the one that I bought and still use today. I think I paid something in the region of £350 for it at the time and I had it assembled and up and running in a day. This was definitely a kit for people with sharp eye-sight and the skills and tools necessary for working with surface-mount devices. Shortly afterwards, the kit option was withdrawn from sale. I think that perhaps there were too many people having issues with the kit that providing kit-related support was proving costly. Version 3 models now sell for over £500 … still a fraction of the price of big-name professional kit. 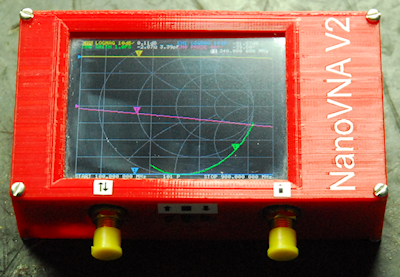 My NanoVNA in a 3D-Printed box


And then along came the NanoVNA for a little more than a tenth of the price of the current DG8SAQ VNWA. With a frequency range of 50KHz to 3GHz and actually usable up to over 4GHz, I had to give one a try. Like the DG8SAQ, the swept frequency source is internal. However it has its own built in (albeit tiny) touch-screen colour LCD. It is also USB controllable and the PC software is easy to install and configure. My one is a V2 Plus and came with a built-in lithium battery (chargeable via USB) and a Calibration Kit. I am uncertain of the quality of the latter

The provenance of the NanoVNAs available to buy online is far from clear. All appear to come from China, yet a search in relation to designers OwOComm implies no specific country, instead implying that it is an umbrella name for a group of designers. Further ‘digging’ suggests that the original NanoVNA was by ‘edy555’ from Japan. Off course the ‘official’ NanoVNA website says that the NanoVNA V2 is a total re-design and is not based on edy555’s design. Even OwOComm acknowledge that more than one manufacturer is currently engaged in producing these. The schematics and firmware are however open-source and available on Github.

All that said, so far I cannot fault this amazing little VNA. My prime reason for buying it is for carrying out HF antenna measurements for a friend. Basically I need a low-cost hand-portable antenna-analyser, and the NanoVNA more than fits the brief. The fact that it offers good dynamic range (70dB - 90dB depending on frequency and sampling) up to 3GHz and up to 4.4GHz with an acceptable drop in performance, is incredible to say the least. Remember, the HP-8510 offered up to 100dB dynamic range. Thirty-five years later we can now buy something that fits in the palm of your hand, that in terms of performance, is comparable with the HP-8409 and 8510, albeit over a smaller frequency range.
Hewlett-Packard, DG8SAQ, NanoVNA
« previous
next »